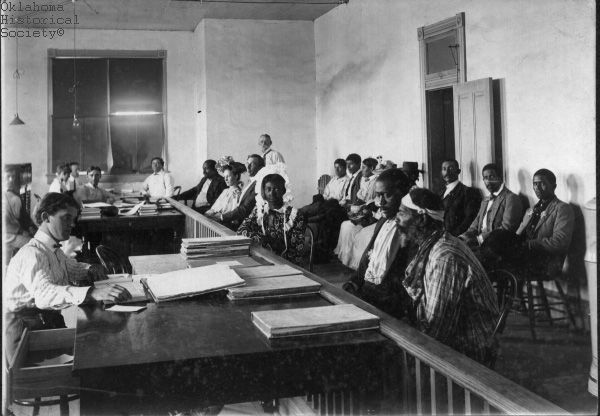 Many American Indian cultures, like the Choctaw and Chickasaw Indians, practiced a form of non-hereditary slavery for centuries before contact with Europeans. But after Europeans arrived on Native shores, and they forcibly brought African people into labor in the beginning of the 17th century, the dynamics of native slavery practices changed. Supporting the Confederacy during the Civil War, how did traditional native slavery transform in the Indian Territory throughout the 18th and 19th centuries into something resembling the unchangeable enslavement system of the American South?

Guest Nakia Parker joins us to discuss the African American slave-holding practices of the Choctaw and Chickasaw Indians during the 19th century, tells us how this system evolved, and reveals the claims to tribal citizenship from this enslavement persisting to the present day.

Thank you. I’m happy to be here.

Thank you. So Nakia, the Choctaw and Chickasaw lived in the American Southeast and large, well organized, agricultural communities. When and why did they do decide to acquire black slaves.

So many American Indian cultures, like the Choctaws Chickasaws practiced a form of slavery for centuries before contact with Europeans. But Indian slavery wasn’t thought to be hereditary or unchangeable and it wasn’t based on any notion of racial superiority. So in other words, you weren’t born into slavery. You weren’t a slave for life, and enslavement in these nations wasn’t justified by the argument that one group of people was racially superior to another group of people. Slaves were often given as gifts and political negotiations. They were also adopted as kin or as family members to replace deceased relatives.

But after Europeans arrived on Native shores, and they forcibly brought African people as well for labor, then the dynamics of native slavery practices change, particularly in the 17th century. So for a brief time, some white people enslaved American Indians, Indian slaves, particularly women, and children, worked alongside people of African descent in places like Virginia and North Carolina. Some scholars even estimate that this was a very lucrative trade that in South Carolina alone, there was around 50,000 native people who were enslaved. So for a period of time native people and people of African descent and enslaved together, they intermarried, they resisted enslavement, they rebel together, but the Indian slave trade ends around the 18th century early in the 18th century. A few reasons why: one is disease wiping out Indian populations. They had little immunity to these diseases, but in particular the British, the French, the Spanish, they also dependent on Indian nations for trade, so it’s not practical to enslave people you’re trying to make political alliances with. 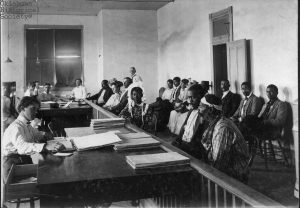 So eventually some nations like the Choctaw and the Chickasaw they begin actively participating in trading black people, people of African descent, to Europeans and white Americans in exchange for supplies things like weapons and furs and they use enslave people of African descent for leverage: political and economic leverage. So eventually, some native people even engage in plantations. They build plantations, large scale slave holding practices as a way of securing economic and political leverage.

How did owning these African American slaves alter Choctaw and Chickasaw society?

So I should make clear, first of all, that the majority of Choctaw and Chickasaw people did not participate in chattel slavery so by 1860 less than 10% of Choctaw people engage in this type of slavery. And in the Choctaw Nation, the average goes up to 25%, but enough participated in the institution to alter Choctaw and Chickasaw societies. And so one way they were altered is that slave holding practices and laws that political leaders implemented looked a lot like white Southern slave holding societies and not native forms of slavery. So let me explain that a bit.

So most of the slave holding class and these nations were men, women who had white fathers, usually British or friends, traders who had married native women, and the children from these unions usually spoke fluent English. They went to American schools. Some of them even had occupations such as lawyers. They made influential friends among white American politicians and business people, but because Choctaw and Chickasaw nations were matrilineal societies, they were considered native and they had influence in their respective nations. So men of this, in particular, this elite slave holding class, served in the government. They passed slave code laws. These laws looked like slave codes that were implemented in Mississippi and Georgia.

So enslaved people in the Choctaw and Chickasaw nations couldn’t read or write. They couldn’t carry weapons without the permission of their enslaver, they couldn’t intermarry with Choctaw and Chickasaw people. So these kinds of legal restrictions and this idea that people of African descent were inferior, and that slavery was an unchangeable, that was very different from native practices that I talked about earlier, traditional native slaving practices.

The Choctaw and Chickasaw Indians were what many scholars have referred to as “removed Indians,” meaning the federal government negotiated treaties calling for their removal from the southeastern United States to the Indian territory in present day Oklahoma during the early 19th century. Did enslaved African Americans accompany the Choctaws and Chickasaws as they were removed to the Indian Territory?

Yes, they did. So federal government treaties, policies that were created to enforce Indian removal also accommodated and maintained the institution of chattel slavery in these nations. So, for example, both the Choctaw and the Chickasaw treaties, allotted reservations of land to native individuals in Mississippi and Alabama until they were ready to move westward, and then when they were ready to move, the person could sell their section of land for money, or they could buy enslave people with that. So they can use that as a form of portable property. They’d even receive monetary compensation when federal over movement agents used their enslaved people to be wagon drivers, to be laborers, to be interpreters during the journey West so many enslave people made the track easier for Native people because they were able to do these labors.

So participation in chattel slavery allowed some Indian slaveholders to actually benefit from removal despite the federal government’s assault on their sovereignty and taking their land.

The Indian territory was bordered by two slave holding states, Texas and Arkansas, were enslaved people in the Indian Territory ever kidnapped and captured and sold into these states?

Yes, they were. In fact, the business of slave kidnapping was very prevalent and lucrative from Indian territory to states like Texas and Arkansas. Slave kidnappers appear to target places that they knew they could get many enslaved people and other forms of valuable commodities in Indian Territory like horses. So the Choctaw and Chickasaw nations as they were in close proximity to Texas and Arkansas, they were particularly enticing to white kidnappers in these states. Slave holders in the Choctaw and Chickasaw nation, often complained to federal officials in particular about Texas slaves stealers. They petition the government to compensate them for the loss of their enslaved property. Sometimes they received reimbursements. Sometimes these court cases dragged on for years with no satisfactory answer.

And then we have the voices of enslaved people themselves. I’ve seen from slave narratives where enslaved people were very aware of this volatile and dangerous environment. And they took precautions to protect themselves from kidnapping. So for example, I’ve read a narrative where one enslaved women recalls that when carrying out the daily tasks like washing, that they would take precautions if they saw an unfamiliar wagon or unfamiliar people in the area because they were afraid they would be a kidnapper. So they would wash clothes closer to slave quarters or to the plantation house instead of going down to the river. And this was also because they heard of incidents of particularly women and children being stolen and sold to Texas. So enslaved people were very aware of their environment and had a keen knowledge of Indian Territory and how to navigate it as well.

And bordering the Indian territory to the west, of course, are the Great Plains. Did enslave people in the Indian Territory ever encounter any of the Plains Indians like the Apaches or the Comanches for example?

Yeah, that’s a good question. They did encounter them. And their interactions with these groups varied considerably. So, some enslaved people found sanctuary and would start a native communities. But at the same time groups, like the Comanche and Apache, also kidnapped enslaved people as well. So while enslaved people were very vulnerable to violence, like Comanche raids and kidnappings, they also look to the same groups to provide refuge. Some of them would run away for a time and find refuge with these native groups. And sometimes they were adopted as kin as well.

The Choctaw and the Chickasaw, of course, supported the Confederacy during the Civil War, the Indian territory was a site of major fighting during the war: were their slaves emancipated immediately following the war?

No, they were not. Since Indian Territory wasn’t considered a part of the United States, the federal government had to sign separate treaties with each of the five nations that sided with the Confederacy, including the Choctaw and Chickasaw. It was not until 1866 that emancipation came to Indian Territory. And so therefore, we’ve seen several slave narratives where enslaved people say that they were still held in slavery in the Choctaw and Chickasaw nation. After the Civil War, they were still being sold on the auction block as well. And so no, to put it simply, there was almost a year after the war that enslave people received freedom.

And many of the emancipated people after the war in the Indian Territory, of course, had indigenous ancestors: did these formerly enslaved people and their descendants face any roadblocks as they tried to claim tribal citizenship in the years and decades after the war?

Yes, they faced several roadblocks. So the US government demanded two nations like the Choctaw and Chickasaw, that along with emancipation, they also had to give citizenship rights and provide land to their former slaves. This was something that they had not required of the Confederacy. And so many of these nations thought of these demands as an attack on their sovereignty. In 1866, the Creek, Cherokee, and Seminole did provide full citizenship rights. The Choctaw and Chickasaw did not. The Choctaw finally gave partial citizenship rights to their free people in 1885, and the Chickasaw never did, but this doesn’t mean that free people didn’t fight to gain citizenship and land they actively fought for it after the Civil War. They petition the federal government, as well as the Choctaw government, and they would even do things themselves. They would fight for their own freedom and education rights for their children.

For example, they would set up schools with their own money to provide educational rights for their children, since the Choctaw and Chickasaw governments didn’t supply the money or the support. And many of these same people became very successful teachers and lawyers in Indian Territory and also in the United States.

It’s fascinating. Nakia Parker, thank you very much for joining us today.

Thank you for having me.